We had left Boston behind and were moving onto our next stop; NYC. We had stopped off on our drive to New York to grab a bite to eat and like mentioned in a previous post about our bad luck, we arrived only to be told our reservation had been cancelled.

We were staying just outside NYC at the Super 8 North Bergen/New Jersey. So we arrived and they only had a room for the one night (we were meant to be staying 3) and we should check with them the next morning to see if they had any cancellations. Not exactly an ideal situation especially when you’re meant to be staying for 4 nights!

We were up and at it relatively early, headed downstairs in the motel for some breakfast (we were completely loving our frosted flakes each morning) and to ask about the room situation. Fingers crossed things would work out! … which of course they did. They were able to offer us a room with a king bed which they would then also put a single bed into for us, we would have probably taken anything so obviously we snapped this up as it saved the hassle of trying to find another motel.

It was great as there was a shuttle that stopped right outside the motel to take you into NYC and at like $3 each, each time we used it we couldn’t complain.

So we hopped on the shuttle and off we went. The shuttle would go to the Port Authority but we would get off round the corner from here. I’d been to NYC once before so although it was a few years ago my memory of where things were was actually pretty good. Our first stop for the day was Times Square of course.

We done a little bit of shopping, walked around a little and then headed back to the motel to get changed as we were going to see some shows that night. 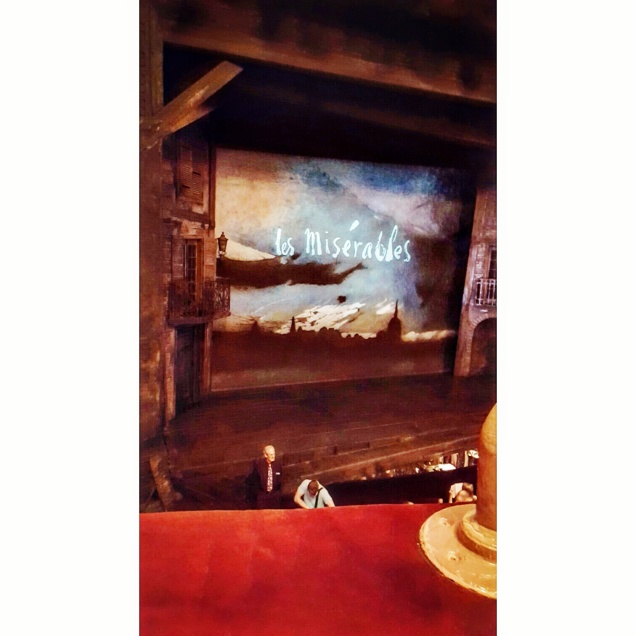 I had been looking forward to seeing Les Mis so much, and it was just as incredible as I thought it would be. After it finished Ellé didn’t feel so good so we headed back to the motel.
June 3rd:

We were up, ready and out to get the shuttle into NYC relatively early again. Getting off our shuttle and today our first stop was Carlos Bakery. With 2 of us being big fans of Cake Boss we were so excited to head here and try some of their cakes, which did not disappoint, I had one of the best donuts of my life. 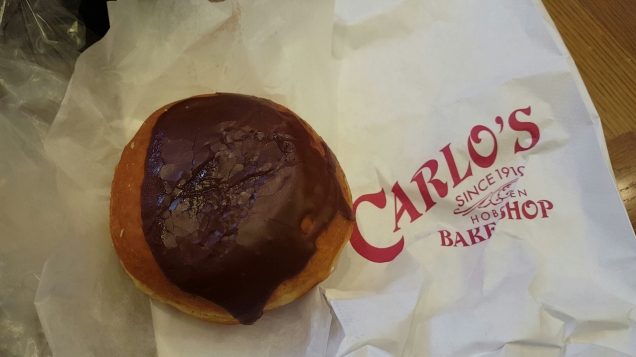 I got the chocolate custard filled donut and also it both an original and chocolate cannoli for later. They were all amazing.

After we stuffed our faces with cakes we started our tourist duties for the day, heading firstly to the empire state building. I’d been before but we were planning on going up as far as we could 103rd I think? But it was a bit foggy so we couldn’t go up as far unfortunately. Still a fabulous view though. We headed to ground zero after, which had changed since I was last there. For me the experience of going there was the same as before, I could literally feel my heartbreaking for everyone and their families. It always gets to me when you read their names and it says “and unborn child” beside their name. Even thinking of it now I feel such strong emotions. 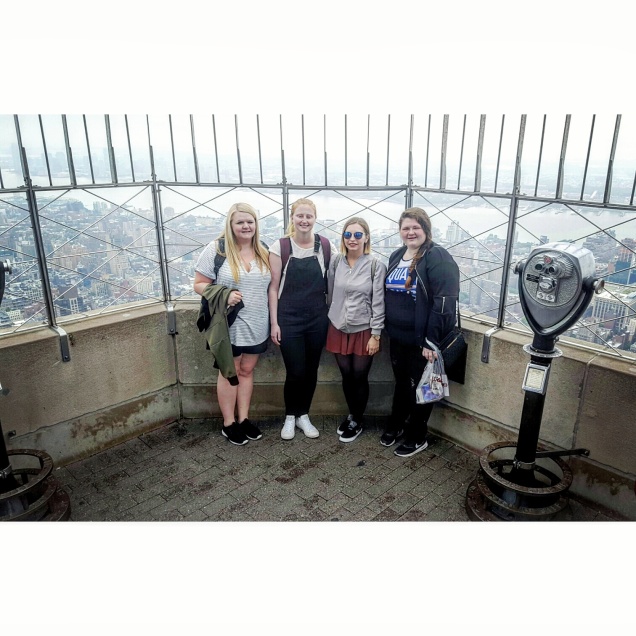 After a short walk towards the Hudson river and for my friends to see the Statue of Liberty (from this distance was enough apparently) we decided to get some lunch and found a lovely restaurant on the riverside. Merchants River House; it was amazing. We got beautiful food along with a few cocktails, we’re Scottish we start drinking early. The food was just incredible, I had got sundried tomato crusted cod with a vegetable risotto and I scranned the lot!

Our next stop for the day was the Brooklyn Bridge, we walked down to it, grabbing an ice cream along the way. We also quickly discovered Clare has an obsession with bridges which we didn’t give up the entire trip; everytime we seen or crossed one it was pointed out to her. We then got the underground to Grand Central Station before deciding we had done enough sightseeing for the day and we needed a drink in our lives. We headed towards a a Scottish bar (as you do when you’re Scottish and see one elsewhere) I can’t even remember the name of the pun but it was just off times square with an Irish pub literally next door? Anyway we had one drink and left to go to the Irish pub because the service was atrocious! Needless to say we had more fun in the Irish pub!

Being slightly tipsy we felt it was time for some food in our lives, found somewhere selling pizza,  our eyes were bigger than our bellies. Then headed back to the motel. 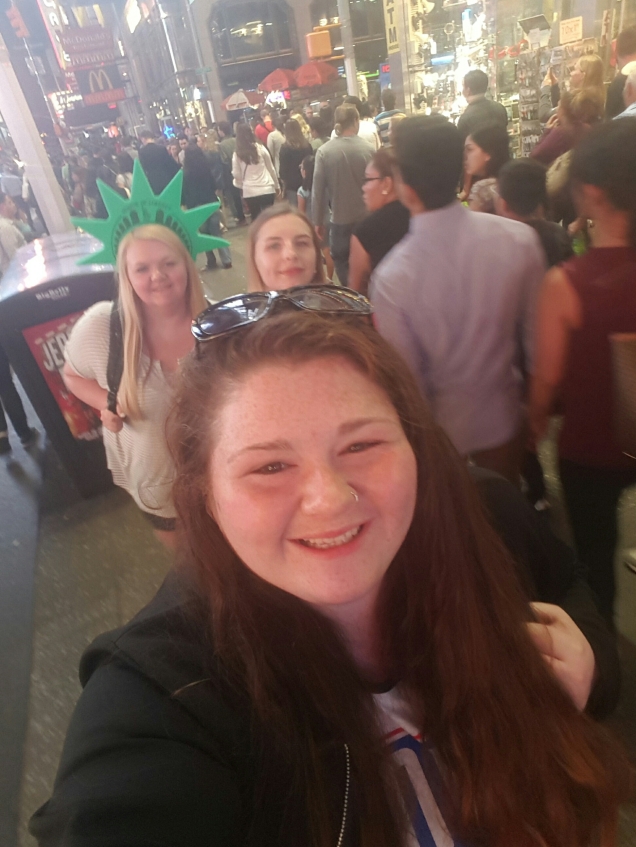 Our last day in NYC! Once again getting the shuttle in and we went straight for food, heading to Applebee’s! I got steak (the first of many on this trip) followed by s’mores churros which unfortunately weren’t as good as we thought they would be but still good nonetheless. We hit up Macy’s first and then Central Park was on the agenda for us today we we walked up there and walked our way through a small part of Central Park before stopping at a lovely wee bench and enjoying the view around us. I was so glad I was back here, and I got to see parts of the park I hadn’t seen last time.

After relaxing for a while we decided upon going to Coney Island and headed towards the subway (after some detours along the way) we got to Coney Island at least an hour and a half later if not longer. We mostly walked around, enjoying the view in front of us before grabbing some food and then heading towards the big wheel. Now being someone that’s scared of heights I tend to stay away from these monstrosities but somehow I found myself on it, the experience not being too bad if I’m honest. Now back home we’ve tried our deep fried Mars bars, so when we seen deep friend items on a menu we had to try them. We decided to go for the oreos, which was definitely a good choice! After getting the subway back and the shuttle back to the motel that was our time in NYC over and done with. 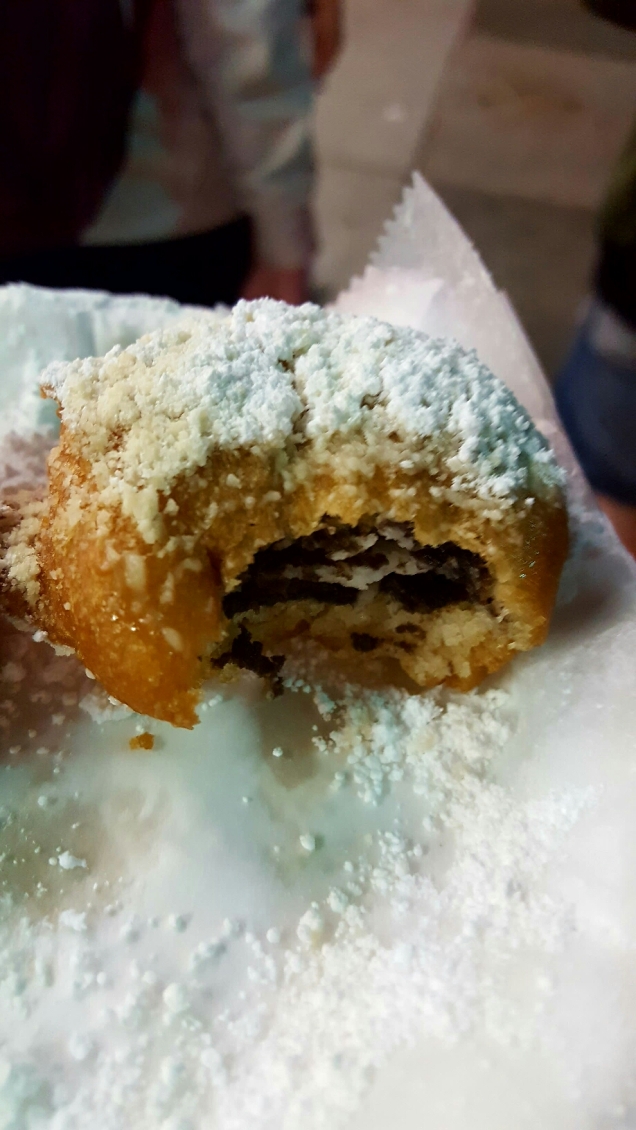 Our first week in America was almost complete..